Wildlife Compassion
Disclaimer: Warning for graphic images in some of the links.  Although some images are difficult to view, they reveal the truth behind what is occurring and how inhumane these practices are.
​ 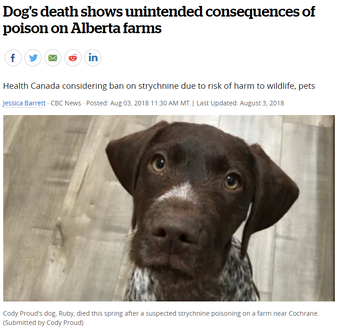 ​Strychnine Poisoning
Strychnine is unreliable and ineffective in the control of fossorial rodents such as ground squirrels and pocket gophers.
Excerpts from Intolerable Cruelty by Gilbert Proulx (available from Parkland Regional Library and Cochrane Public Library)

Secondary poisoning has been proven. A dead northern harrier was found after a field was treated with 0.4 strychnine laced-oats. The deer mouse the harrier ate contained 2 of the poisoned kernels of oats. Badgers and long-tailed weasels are two very important predators that prey on ground squirrels and pocket gophers.

Wolves and coyotes function as the immune system for ecosystems. They provide defense against diseased animals and control overabundant rodents and ungulates.

Death by strychnine poisoning is inhumane, excruciating and can take up to 24 hours, depending on the dosage and size of animal.

Strychnine is non-selective.  Many other creatures die as a result of strychnine laced bait. In the Canadian prairies, strychnine-laced baits used to control wolves also caused the decimation of the endangered swift fox. The American badger is now considered a species of special concern due to poisoning from strychnine.

------- Alberta and Saskatchewan are the only provinces remaining that allow poisons ------
The time is long overdue for these two provinces to ban poisons. 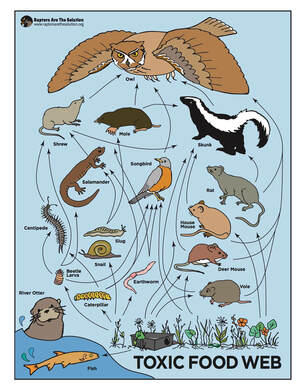 Rodent Poison
Alberta is unique, having a near non-existent rat population, but rodent poisons are still making their way up the food chain.

"Once a rodenticide is used, its effects reach far beyond rats, mice, or other pests. The poison becomes an artificial, often lethal part of the food chain and can irreversibly harm delicate ecosystems as well as domestic animals and even children. Whether it is an owl bringing a poisoned rat home to its nest, a fox swallowing a newly captured squirrel, or a neighborhood cat devouring the mouse it discovered in the basement, the use of poison simply doesn’t make sense. Not for wildlife and not for us."
www.raptorsarethesolution.org
​
Here are some tips to deter rodents naturally, without the use of fatal poisons: www.hungryowls.org